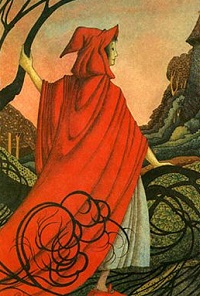 This image depicts Molly Whuppie.  Image Henny-Penny:  An acorn falls from a tree and hits  Henny  Penny on the head.   Henny  Penny believes that the sky is falling and proceeds to journey the king and share her news. Along the way,  Henny  Penny acquires a group of characters who want to tell the king as well. Before they reach the king, they run into Foxy  Loxy . Foxy  Loxy  offers to show a "short cut" to the king's palace and the group follows. Foxy  Loxy  eats the group and no one shares news with the king. Molly Whuppie:  Molly Whuppie is a female trickster, an underdog who outsmarts her adversary, the giant. The story describes how she internalizes the sad abandonment by her parents and becomes resilient, willing to take on and complete the three quests set by the king. She seizes on he opportunity to secure a better place for herself and her sisters. It is this sense of having control over one’s actions, of having the power to change one’s station in life that ma
Post a Comment
Read more 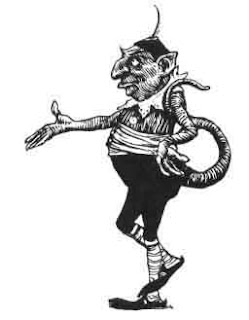 This image is of Tom Tit Tot the black thing.  Image Tom Tit Tot: This story is about a girl who once ate her mother's pies. The mother made 5 pies and the daughter ate them all because her mother said that shall come back. The pies never came back but her mother wanted one for supper so the daughter began to sing. It just so happened the king was passing by and heard her singing but could not make out what was said. The mother sang about spinning five skeins. The king made a deal to marry the daughter and he would take care of her for 11 months out of the year but on the last month she must spin five skeins for him daily. She agreed and she lived with the king happily for 11 months and on the last month he was ready to cash in his end of the bargain. The girl was locked in a room with food and flax and had spin five skeins or she would be beheaded, but she had no idea how to spin. But then a little black thing knocked on the door to make a deal with girl. He said to her, "I&#
Post a Comment
Read more 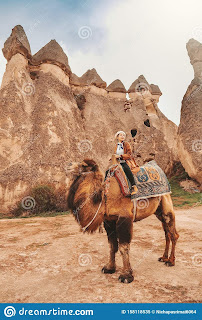 This is an image of Leah Nydus riding her camel that I found off of google.  https://www.dreamstime.com/traveler-woman-riding-camel-goreme-fairy-chimneys-cappadocia-nevsehir-province-turkey-image158118535   Leah Nydus was wondering hastily around her pasture one day yelling. Finally, Leah Nydus's sister finally came outside to see what all the ruckus was. "What are you looking for exclaimed her sister?" "I have lost my favorite shoe," Leah Nydus responded. "Why are you looking out if the field for a shoe?" her sister said.  Leah replied, "because out here there is nothing to look under so it should be easier to find."
Post a Comment
Read more 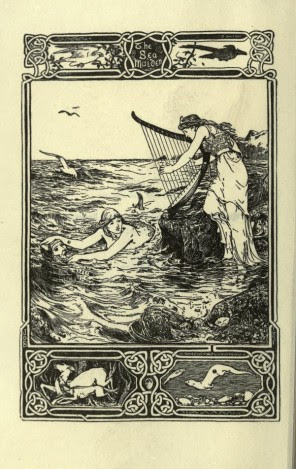 “The sea maiden.” Illustration by John D. Batten from Celtic Folk and Fairy Tales by Joseph Jacobs, publication date unknown.  Image Connla and the Fairy Maiden: In this story it tells the story of Connla and the Fairy Maiden. Connla is the son of Conn the King. One day day Connla hears the voice of the Fairy Maiden pleading for him to come to the Plain of Pleasure ad a crown awaits him. When Conn the King heard of this he call in the Druid to get rid of the maiden. The druid came and chanted his spells but before he was finished the maiden threw Connla an apple. Connla ate nothing but this apple for 30 days and after the month was up the voice of the maiden was heard again. The druid and Conn threatened the maiden  but she was not scared of them. Soon later she convinced Connla to come with her and so he did. The two were never heard of or seen again.  The Field of Boliauns:  This folktale from Ballincollig tells the tale of Tom Fitzpatrick, who caught a Cluricaune and demanded its go
Post a Comment
Read more

This image is of Zeena after marrying the Indian so now she is an Indian Fairy.  Image   Once upon a time there was a beautiful fairy named Zeena. She was the only daughter of the Fairy Queen herself. Zeena lived a very good life due to her family supporting her in everything she did.    Zeena was very popular amongst all of the fairies and many always wanted to play with her. But she loved to roam around by herself out into the forest. Zeena had many secret hideouts in the forest that she would disappear to frequently. The Fairy Queen wanted her daughter to be more like all of the other fairies her age and eventually marry another fairy prince.    Legend says that on the other side of the forest lives Indians of the Plains village. The Indians lived happily and were never disturbed by any other creatures. The Indians could hunt, fish, and grow their own crops at their own will with no intruders. But at night they would all go into their teepees and the teepees would magically disappea
2 comments
Read more 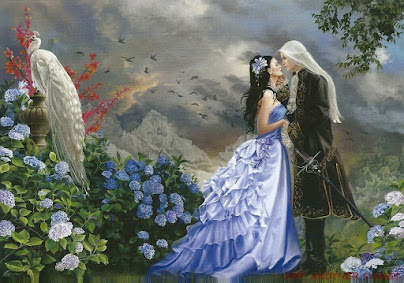 This is an image of the fairy bride and her husband.  Image The Boy who Snared the Sun: The story begins with Lagoo telling a story of ancient times to a little boy and girl. Lagoo talks about a time of a mastodon that ate all the food and the only people left on earth were a little girl and her dwarf brother. The older and bigger girl was tired of doing all the work so she gave her brother a bow and arrow and told him to learn how to use it. The boy became cold and decided to kill some snow birds to make himself and he ended up killing 10. His sister sewed the bird skins together and made him a warm coat. The boy then decided to go wander the world din search of other people. On his adventure he realized the sun was shrinking his coat and he was so angry at the sun. He slept on his side for 10 straight day and 10 straight days on his other side and then decided to get revenge on the sun. The girl got some tough grass and made a rope then used her hair to make a cord. The boy made a sn
Post a Comment
Read more 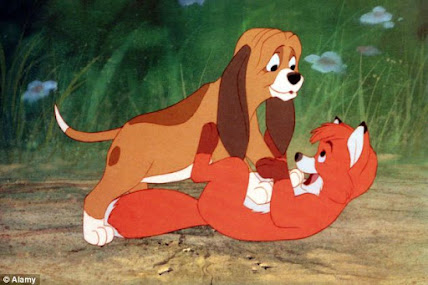 This image is from the fox and hound but this my representation and inspiration of Bailey and the Fox.  Image Bailey, the Fox, and the Rabbit Bailey and the Fox went out to find food. The Fox was fast enough to catch a rabbit, but Bailey was not. Bailey was very angry that the fox caught some food, so he wanted to get revenge on the Fox.  Bailey sat and admired the rabbit. Can you help me gather some wood to cook it? Said Bailey. The Fox eagerly jumped up go and get wood that he let the rabbit loose. Bailey sped up and caught the rabbit, scarfing it down in one gulp.  When the fox returned he was so sad and hungry.  Bailey never told the fox the truth. Bailey and the Crunchy Soup As time goes on Bailey keeps tricking the fox. Now the Fox wants to get revenge. The fox invited Bailey to come and eat dinner with him.  The fox was to cook a big dinner.  The Fox made a soup, but it had many crunch pieces in it.  Bailey asked, Where did you find these crunchy pieces? They are delicious, he c
2 comments
Read more
More posts